It’s been a while since I’ve written this series. I started out pretty strong, then waned off as I worked hard on writing that I actually wanted to SELL as opposed to give away for free.  But, hey, this is a great marketing tool right here.  The importance of platform can’t be overstated.  Therefore, let’s return to disseminating the Five Room Dungeon Model.

Once the PCs have fought through a dungeon and watched the story unfold before their eyes, gained some treasure and experience points, they are ready for the final battle.  The fourth room of the Five Room Dungeon Model is that: the Boss Monster.  This should be the toughest encounter that the PCs have faced so far, and therefore the most exciting and yield the most treasure.

The Boss Monster isn’t necessarily a Legend of Zelda-esque huge thing that takes up most of the screen.  It does, however, have to be tougher than the PCs.  For my D&D 3.5 games, I typically stage a fight with something 2-3 levels above the PCs.

You might take advantage of the encounter tables in the Dungeon Master’s Guide and use them to build an encounter with lots of minions serving one large monster.  Tailor it to the party level.

For example, assume the party has an average character level of 7.  If you use a Boss Monster that has an encounter level of 9, then you could have a monster with a CR 8 and another one with CR 6.  Or, you could have the main boss be CR 8 and use two CR 3 body guards/flunkies or whatever suits your fancy.

This encounter should be the most memorable of the dungeon, so this is the time to pull out all of the stops.  Interesting terrain, an advantageous position for the enemy, anything that you think will make this encounter exciting.

In our example dungeon, the red herring in the previous section appeared to be the Boss Monster, but we find out that, in fact, the PCs have been manipulated all along by the wizard Gerhardt.  The PCs only thought Gerhardt was a wizard.  In fact, s/he was a green hag in disguise.

Worse, s/he doesn’t need the spell component to banish the orcs.  That was a ruse.  The battle is going to take place now, unless the PCs can devise a better solution.  Should the battle take place and the town is caught in the crossfire, that will be a huge-scale encounter and not within the scope of this article.

At some point, the PCs should deal with Gerhardt and that becomes the Boss Monster encounter of our little dungeon. Since the PCs are 3rd-5th level for this example, I say let’s throw the entire hag covey at them. Most hags organize in this way. How to get them to face the entire covey?

Well, it’s too easy to return to town and have Gerhardt be right there.  No, it’s a trope of cop shows that, no matter how cooperative the murderer has been up till now, he knows that the cops know and when they come for him one last time he runs.

No need to be different for our D&D game.  Let’s say Gerhardt knows and is therefore in the wind.  She’s retreated back to her hovel, which the PCs will have to find using divination magic since Gerhardt has made excellent use of her pass without trace spell-like ability while retreating.

Alternatively, a DC 15 Gather Information check might reveal a rumor of strange lights almost due east of the village, and each night the PCs spend watching the skies give a cumulative 10% chance of seeing such lights. Once the PCs see the lights, it will take 4 DC 12 Survival checks (made once per hour) to find the hovel.

Once at the source of the lights, or at the location pointed to by the divination magic used, the PCs find a hidden cave entrance with a DC 15 Search check. After a quick descent on the stone steps, the PCs find themselves in the cave pictured below. I found the map at ENWorld via Pinterest. Hopefully I’m not violating anyone’s copyright by placing it here. 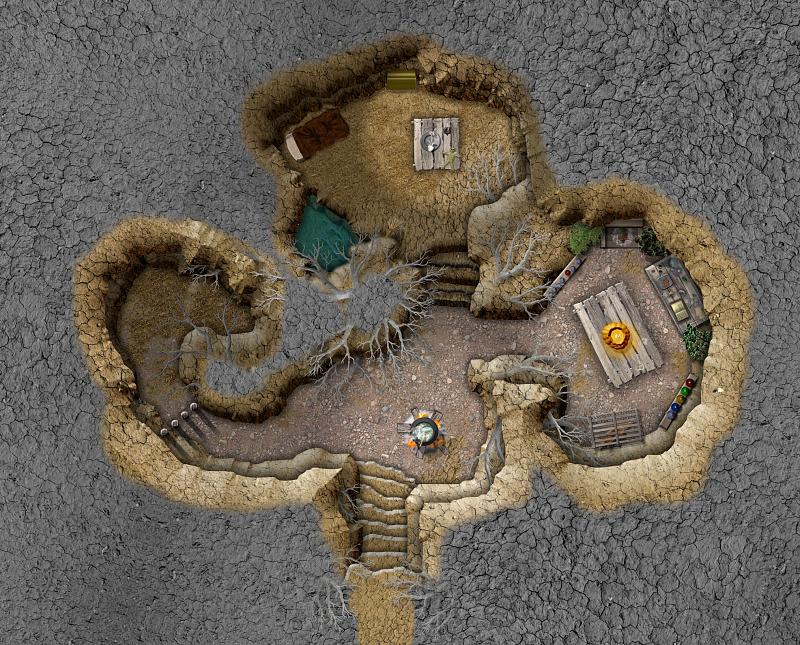 Creatures (EL 9): The hag covey needs the component from the yuan-ti temple to complete some foul ritual known only to them. Since the yuan-ti had took over the temple, the covey decided to dupe someone into recovering it. The impending war between the orc tribes massing on opposite sides of the PCs’ village gave the perfect excuse, so they invented the banishment spell story, and one of their number impersonated an impressive wizard to complete the con. 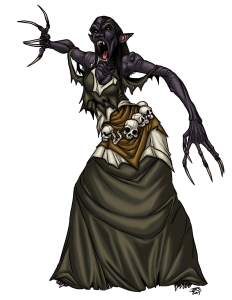 Tactics: The hags have scried the PCs the entire time and are ready for battle when the PCs arrive. They know which ones are fighters, wizards, etc. The two green hags are invisible and wait until the PCs are all in the room. At the first opening, each invisible hag makes a touch attack against the two strongest fighters (or a fighter and a spellcaster) to use their weakness special attack.

The annis, meanwhile, will try to give her sisters the opportunity by moving quickly so she can be flanked by attackers. She then attacks any weakened target, first with her claws and then tries to rend and rake them. She will only use her fog cloud if the covey is in danger.

If they manage to weaken the fighters, they will try to close in and engage the spellcasters in hand-to-hand combat. Since hags are surprisingly strong, this can be deadly. The hags fight to the death.

Treasure: In addition to the standard treasure, the hags have a hag eye and a crystal ball among their possessions. The crystal ball should make it obvious why they were prepared for the PCs. Remember that if the PCs uncover the eye before they fight the hags, destroying the eye will deal 1d10 points of damage to each hag and blind the one that sustained the most damage. This is a great way for stealthy PCs to get a leg up in battle.

Development: The hags can see through their hag eye, so if PCs uncover it, all three will rush to investigate this turn of events. They will arrive 1d6 rounds after the PCs first grab the eye.

Now what? Well, this adventure has concluded so it’s time to figure out what’s next for your PCs. On to the final room of the dungeon.